Need a little change of scenery ? Traveling also goes through the plate !

A Spanish tortilla, Mexican tamales, a Vietnamese pho, a Scottish haggis, a Moroccan pastilla … gastronomy, which makes us discover a country by its flavors, makes us travel differently.

Embark on a gourmet world tour with 10 exotic and tasty culinary specialties. Bon Appetit of course ! 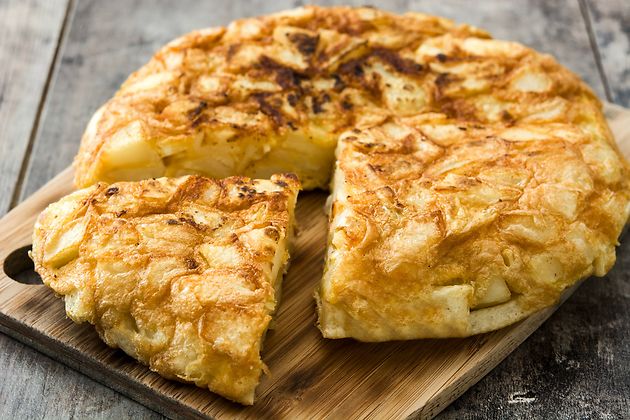 Reference of Spanish gastronomy like gaspacho or paella, the tortilla de patatas is an omelet topped with potatoes that you eat at all times. It is tasted in restaurants and bars all over Spain in La ration, in the form of tapas (in the big cities), pinchos (in the basque Country) or a bocadillo (sandwich). In homes, it is a unique dish that is shared with the family.

If the main ingredients are obviously eggs and potatoes, the issue of onions in the original recipe remains unresolved, especially in Catalonia. Depending on the regions, there are different variants: with ham in the Sierra, seafood in Galicia, vegetables in the south of the country…

The origins of the tortilla remain controversial. According to legend, the tortilla de patatas was invented in the nineteenth century by the Basque general Zumalacárregui during the siege of Bilbao to feed the Carlist troops. In another version, a peasant woman from Navarre would have sheltered general Zumalacárregui for one night and had only eggs, potatoes and onions on hand to prepare him a meal. Satisfied and filled, he popularized the omelet with the Carlist soldiers.

What to remember is that the tortilla was invented in order to be nutritious while being cheap. More recently, the scientist Javier López Linaje places the origins of tortilla in the eighteenth century in Villanueva De La Serena. An invention of Joseph de Tena Godoy and the Marquis de Robledo to counter hunger. 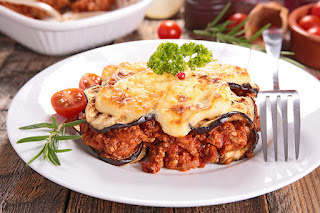 Want sun and heat in your plate ? True emblem of Mediterranean cuisine, it is in Greece that the moussaka makes us travel ! This traditional dish of Greek cuisine is known all over the world and appreciated for its summer flavors and scents.

Although older versions are found in the Balkans and the Middle East, the modern version of moussaka, as enjoyed today in Greece, would have been made by chef Nicolas Tselementes in the early twentieth century. It is prepared with minced mutton that is layered with slices of eggplant lightly fried in olive oil, tomatoes and onions. Everything is seasoned with fresh herbs, covered with white sauce before being baked and served commonly in square parts. In Macedonia and northern Greece, potato rings are added to it.

The main competitor is the Turkish moussaka. Green peppers are added, white sauce disappears, and the ingredients are not layered. It is often served with rice.

Very close to the moussaka, papoutsakia (“little shoes”), consisting of eggplants filled with minced meat and white sauce, also has serious arguments to treat us ! 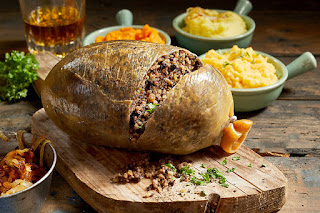 Scotland has some delicious specialties including the famous haggis ! If its appearance can reject more than one, it compensates for it by its unique and tasty taste. You’ll have to taste it to believe it…

This sheep’s belly stuffed with animal hair, oats, onions, salt and spices, is long boiled or steamed and is accompanied by neeps and tatties (turnip and potato puree) as well as a glass of Scotch whisky. Once it was a convenient dish, because it is very easy to carry by herdsmen of the Highlands.

It is the custom of Scots to consume haggis at St Andrew’s Night (November 30th) and especially at Burns Supper (January 25th), where they read the poems of the national poet Robert Burns, of which Address to a haggis wrote in 1787.

Haggis is also the origin of one of the most amazing sport, Haggis Hurling. A haggis of about 500g should be launched as far as possible without bursting on landing. No mess, the haggis must remain edible ! 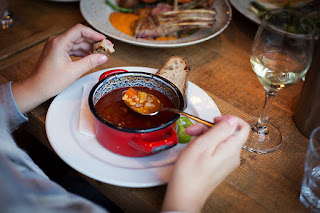 In France, goulash refers to a stew. But, in Hungary (gulyás en VO), it is a soup established as a national dish since the nineteenth century !

Goulash is a peasant dish invented by the cattle ranchers who left their homes for long weeks or even months to bring their herds of Hungarian grey oxen to pasture in the Carpathians. In order to feed, they poured a little water into a bogrács (cauldron) Femm and added wild herbs, bacon and pieces of beef. The mixture simmered for hours before being consumed with a simple slice of bread.

It was only in the seventeenth century that the soup obtained its letters of nobility with the addition of paprika, a great star of Hungarian cuisine, which gives the preparation its unique fragrance and color. At the end of the nineteenth century, goulash was consumed in the aristocracy and many foods supplement the recipe, including various vegetables. Today, there are several variants such as birkagulyás (sheep goulash) or babgulyás (Bean goulash), but the traditional goulash remains the most pleasant.

For fans, every year for two days in Szolnok, south of Budapest, a giant goulash is prepared in 700 cauldrons. 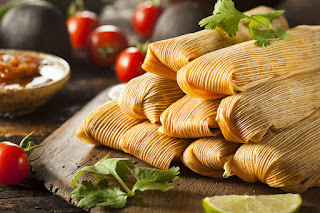 Classified in 2010 as an intangible heritage of humanity by Unesco, traditional Mexican cuisine is gaining popularity. Nothing to do with the local tex-mex ! If tortillas (corn cakes) are a real institution in Mexico, the same is true for tamales that would be almost 5,000 years old.

From the Nahuatl “tamalli” meaning “surrounded”, these small plant papillotes were intended for Aztec, Inca and Mayan Warriors for their ease of transportation during their expeditions. As practical as our current sandwiches ! Tamales were mostly used as offerings to the dead or during religious ceremonies, a tradition that continues in the state of Michoacán, Mexico City or Puebla. Nowadays, tamales are cooked in large quantities on the occasion of holidays in order to be tasted as a family.

If there are more than 300 varieties registered, the principle is identical to all countries of Latin America. It is a nixtamalized corn paste that is stuffed, wrapped in plant leaves and steamed. In Mexico, corn and banana leaves are most often used. As for the stuffing, it can be sweet or salty, made from meat, fish, vegetables, fruits… just let your tastes and desires speak ! 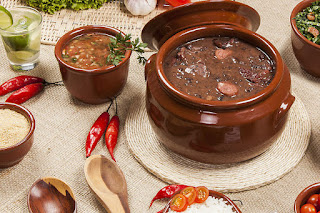 If you like our good French cassoulet and family Sunday meals, you will be seduced by Brazil’s national dish, feijoada. From North to South, this stew of black beans (feijão) and pork is consumed throughout the country without exception. It is accompanied by Rice, Farofa (cassava flour), green cabbage, cassava fries and orange quarters. A little caipirinha is not too much to pass all this !

Cooked for a minimum of six to eight people, feijoada is a festive, friendly but especially family dish that is served on weekends or at specific events. In restaurants, it is traditionally offered a la carte or as a buffet on Saturdays.

According to folklore, the appearance of feijoada dates back to colonial times. The African slaves would have invented it by picking up the low pieces of pork thrown by their masters to mix them with their beans. But the feijoada would more likely be the adaptation of dishes from elsewhere like the Portuguese transmontana feijoada and the French cassoulet, which reinforces its exoticism. 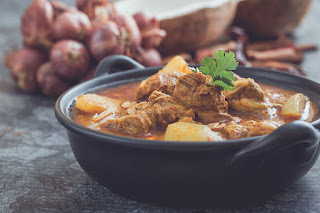 Thailand is home to one of the best cuisines in the world ! Its dishes with curry, lemongrass, coriander, basil … combine freshness and spices.

If one were to remember only one dish, it would be the massaman or massaman curry : it is a rather sweet curry of Muslim tradition, the term “massamam” would be derived from “Muslim”. It is believed that it was introduced to central Thailand in the seventeenth century in Ayutthaya (capital of Siam) or South Thailand by Malaysian and Indian influences.

It is often cooked with beef, lamb, chicken, duck, rarely pork, with roasted and crushed peanuts (or cashew nuts). The massaman differs from other Thai curries by its own ingredients: cardamom, cinnamon, cloves, cumin, star anise, bay leaves and mace (spice obtained from the nutmeg shell).

In 2011, CNN ranked massaman among the 50 best dishes in the world. What makes you want to taste it, right ? 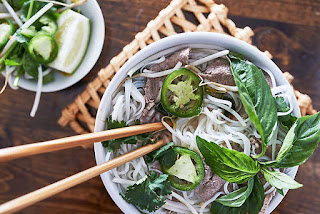 Vietnamese cuisine is refined, light and especially much less spicy than most Asian cuisines, which makes it so beloved by Europeans. Very fragrant, she puts on herbs.
The dish that must be tasted to savor all the subtleties of this gastronomy is the pho (pronounced ” fire “). This noodle soup from northern Vietnam, Nam Dinh region, has spread throughout the country to become a true national symbol. It is eaten on the go sitting on the mini tables and chairs of Vietnamese canteens and is enjoyed throughout the day, although it is originally a breakfast.
The basis of the recipe is a broth obtained by cooking for days beef bones, ginger, NEC mắm (of course !), coriander, anise, spices, and sometimes cloves. Finally, we add beef slats and rice noodles which, according to tradition, must be made by hand less than four hours before being served. In the north, the broth of pho is made only with coriander, new onions and fresh hot pepper.
If the origin of this dish is debated, the presence of French settlers, lovers of pot-au-feu, could have inspired this delicious preparation 100% Vietnamese ! 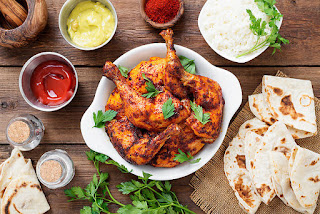 Indian cuisine transports us in a whirlwind of colors and flavors thanks to its many spices. To discover India, there is nothing better than exploring its wonderful cuisine, starting with one of its specialties, the tandoori.
Tandoori cuisine is native to Punjab, northern India, and takes its name from the tandoor, a terracotta oven buried in the ground that was used in the villages for cooking naans, among others. Tandoori refers by extension to all foods cooked in the tandoor, including meat (chicken, lamb…) long marinated in a mixture of yogurt and spices (ginger, cumin, cayenne pepper…) before being dipped in the oven.
Tandoori chicken, which is recognized by its orange color, is undoubtedly the most prepared and popular dish in the country. It was allegedly invented in the twentieth century by a certain Kundan Lal Gujral in his restaurant in Peshawar. With the partition of British India, Gujral went to take refuge in Delhi where his recipe known an immense success and spread throughout India. 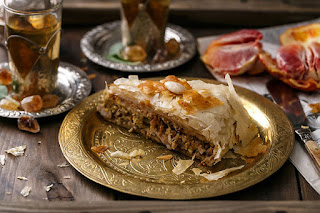 To discover, pastilla is a must of Moroccan gastronomy ! Widespread throughout the Maghreb, the recipes are multiple as well as the appellations : bastel, bastela, bastila…, referring to the Spanish word pastel (cake or pie).
Initially Spanish, the pastilla was introduced to the Maghreb, more particularly to Morocco on the side of Fez, by the Moorish refugees fleeing Andalusia in the fifteenth century.
The Moroccan pastilla of Fez is considered the classic recipe. This is a large cake of almond puff pastry, usually stuffed with pigeon or chicken mince, and lightly sprinkled with sugar and cinnamon. Everything should be as crispy as possible. A real sweet savory treat ! It is especially served at receptions or big events (wedding, birth…) just before the main course.
In sweet version, the pastilla with milk or jawhara, rises like a yarrow with almonds and honey, all fragrant with orange blossom.
Tags
food
Show More
Facebook Twitter LinkedIn Tumblr Pinterest Reddit VKontakte Share via Email Print

The New Istanbul (Constantinopole) – Best Places to Visit in Istanbul