Over the centuries, various culinary traditions have amalgamated to create in Istanbul a unique street cuisine, where there is something for everyone.

ISTANBUL, Turkey-when Ahmet Dilen removes stuffed mussels from their shells, waters them with a drizzle of lemon juice and hands them to customers gathered around his cart as the sun sets over the Old City, he not only delights passers-by : he helps nourish the soul and the very essence of this megalopolis. 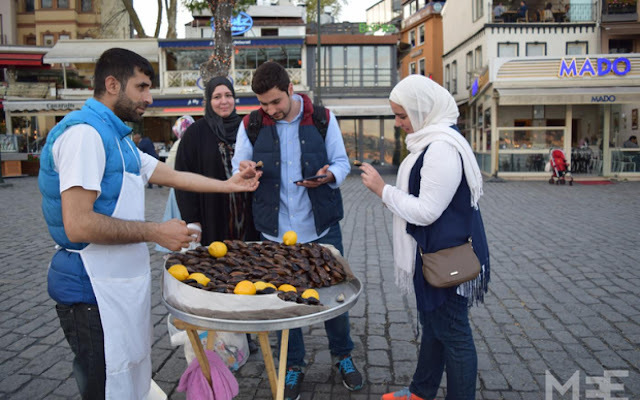 When we talk about Turkish cuisine, we almost always think of kebab – especially the doner kebab. And rightly so, because it has become one of Turkey’s main cultural exports. There is a doner salesman in almost every neighborhood in every city in the country, as well as almost everywhere in the world.
But it is a less well-known street cuisine that speaks to the heart, mind and belly of the inhabitants of Istanbul as well as its visitors. Its great variety evokes a past where multicultural coexistence was the norm, and where a first token of friendship was often culinary. Istanbul’s street cuisine has always played a dual role : it is indispensable to the livelihoods of the less wealthy inhabitants, while injecting variety and vitality into the city itself.
The bouquet of different aromas, potatoes, grilled meat, boiled sugar syrup, and a host of other aromas remind both the Stambouliotes and the tourists of the rich culinary heritage of the city, while inciting them to offer themselves an extra snack. 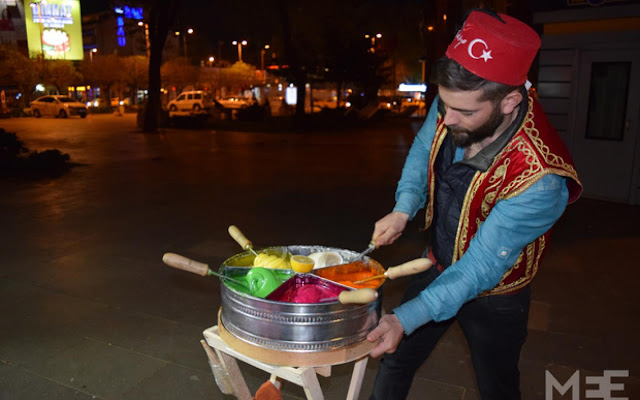 The smells of the different dishes being cooked as the day draws to a close often harmoniously complete the city’s spectacle.
Throughout history, men from all over the ottoman empire have flocked to the former imperial capital, Istanbul, hoping to make a fortune or find refuge there. The flavours of their native land comforted them, while providing them with the opportunity to earn a living. 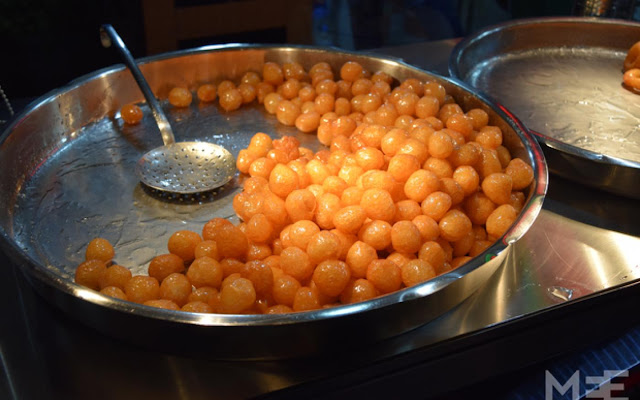 Istanbul’s street cuisine draws on all religions and ethnic origins, from stuffed mussels (midye dolma) borrowed from Armenians, grilled sheep intestines (kokorec) from Greeks, baked potatoes filled with various pranks (kumpir) from the Balkans, syrup doughnuts (lokma) from the Middle East, and brightly coloured sugar paste (macun) from Central Anatolia, to name but a few.
Even today, the stories of some street vendors reflect those of their colleagues from centuries past. Dilen, the Merchant of stuffed mussels, is a Kurd of Mardin. About 90 % of all the sellers of stuffed mussels in Istanbul are Kurds from the southern province of Mardin, neighboring Iraq and Syria and without access to the sea.
They fled the fighting in their region in the 1990s and moved to Istanbul. The preparation and sale of stuffed mussels provides employment for entire families and allows them to earn a living.
“The midye dolma are a speciality of the Armenians of the Port of Izmir. In the 1970s, a Mardin Kurd worked with an Armenian and he learned the recipe. When we were forced to move west, giving up our lives and our livelihoods, we passed the recipe on to each other, and now you can see that most of the midye dolma vendors are Kurds from Mardin, ” Dilen said.
“My mother and sisters prepare midye dolma at home during the day and I come here to sell them at night. »
The midye dolma have also always been on the menu of Greek and Armenian meyhanes (taverns).
“Delicious ! What a fantastic combination of spices and acidity, ” said Ahmed, 25, a tourist from Kuwait tasting the midye dolma for the first time.
Ahmed, who did not know Istanbul’s street cuisine at all, enjoys the city’s flavours, aromas and noises while visiting its attractions. Yet he hasn’t had the courage to try on the grilled sheep intestines yet.
“I saw these things on horizontal pins but I didn’t taste them because I couldn’t figure out what they were. But I tried the kumpir (a baked potato) and it’s also very good, ” he said. 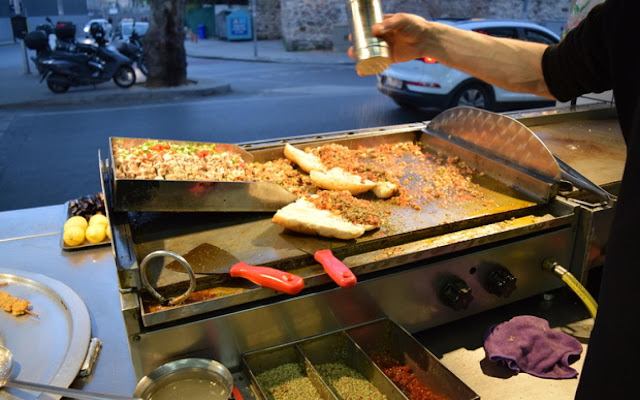 At first glance, kokorec (a sandwich of grilled sheep intestines with crushed tomatoes, thyme and red pepper flakes) may not be appealing to sensitive souls, but those who try to taste it become fans of this recipe. Kokorec is native to Greece, where it is always prepared on the occasion of major religious festivals – while in Istanbul it is cooked year-round and is one of the most popular street dishes.
The kumpir turns the humble potato into a feast: a large baked potato is stuffed with an infinite variety of ingredients, from grated cheese to corn, sausages, yoghurt and pickles.
This name, which comes from the Balkans, comes from krompir, which simply means “potato” in many languages of the region, including in the countries of the former Yugoslavia.
Nowadays, the people who prepare Istanbul’s street cuisine do not necessarily have the same origin as the products they sell.
Ismail Sacak, for example, who is of Tatar origin, was one of the first to set up his stall 30 years ago in the Ortakoy district, now famous for its rows of kumpir stands.
He goes even further back and claims that even though the kumpir came to Turkey through the Balkans, as the potato is native to America, its product also comes from there.
“There are 140 varieties of potatoes, and you can do a lot of things. In my opinion, it doesn’t matter where they come from or who prepares them. The important thing is that the customer is satisfied with the quality of the product, ” said Ismail Sacak.
According to him, street cuisine, whether it is kumpir or other dishes, must be able to adapt to changing tastes over time.
“My potato remains the same but the toppings have changed. Now people are asking for different toppings, and also healthier. If you had told me 15 years ago that customers would ask for grilled fish or eggplant toppings, I would have thought you were crazy, ” he said.
Restaurants can’t steal the spotlight from the street kitchen
Over the past ten years, increased prosperity has led to an increase in the number of gourmet restaurants and an explosion of different types of cuisine, but the humble street cuisine of Istanbul continues to occupy a special place in the heart of the rich as well as the poor and the locals as visitors.
A Chef in a high-end restaurant, Ayvaz Akbacak can attest to the power of street cuisine and its popularity even among celebrities.
“In the menu that I am creating for my new restaurant, one of the entrances is an Italian-style bruschetta with kokorec. My customers appreciate the flavours of Istanbul’s street cuisine and I have to find ways to integrate them into my creations, ” he said.
Ayvaz Akbacak, however, is convinced that street food in Istanbul is not that old, and that it is in fact a fairly recent phenomenon.
“In the Ottoman era, street food didn’t matter that much. It is only recently that it has become so fashionable and old recipes are rediscovered. Look at what’s most common today. All those stands selling hot dogs made from Frankfurter sausages. Hot dogs are German, not Turkish, and this is a very recent phenomenon, ” he said.
Despite the huge popularity of street food, Akbacak has doubts about its hygiene standards and nutritional value.
“These hot dogs and mini burgers are exposed all day to heat or cold, no matter what the weather. I’m not sure that they are top quality foods, ” he said.
These same hot dogs and mini burgers, prepared in special rolls with tomato sauce, remain extremely popular with locals, especially night owls looking for something to eat.
Kokorec (sheep intestines) cook with charcoal in a street stand in Istanbul. This dish of Greek origin is a great success and is appreciated in Turkey (MEE/Suraj Sharma).)
The only option for chefs like Ayvaz Akbacak is to somehow integrate street food into their gourmet menus, because even the well-to-do demand it and love its flavors.
“Not so long ago, simit was the prerogative of students and small civil servants. Now look at his popularity. No one can do without it, ” Akbacak said. “We have to find a way to serve it with haute cuisine. »
Simit is a popular type of bread, ring-shaped and covered with sesame seeds. Cooked after being soaked in a syrup made from grapes similar to molasses. It is a cheap and nutritious snack that can be found on virtually every street corner across the country.
The humble simit costs a Turkish pound (30 centimes), which makes it a staple food for the underprivileged. In a country where the minimum monthly wage is just £ 1,300 (€390), it is street foods like simit or nohut pilav (chickpea rice) at four pounds (€1.20) a serving that help many people meet their food needs. A kokorec sandwich in a quarter of a loaf costs six pounds (1.80 euro).
Without taking into account its nutritional qualities and its more or less hygienic preservation conditions, the street cuisine of Istanbul clearly reflects the very soul and essence of this old city, its numerous civilizations and the variety of the cultural origins of its inhabitants.
Sweet with acidulé and savoury with spicy, it offers something to satisfy everyone’s tastes.