In the heart of the Anatolian steppe is hidden a most amazing decor, born from the fire of the ancient volcanoes. In the middle of all this rock sculpted with eccentricity by nature, are hidden the vestiges of the Christianity of the East, hundreds of churches with Byzantine frescoes carved in the Tuff.
Located in the centre of Turkey, on a plateau more than a thousand meters above sea level, Cappadocia with its caves and canyons looks like a lunar landscape. Volcanic Formations and rock cones form amazing sculptures created by erosion, rain, frost and wind. These long rock towers are called fairy chimneys. 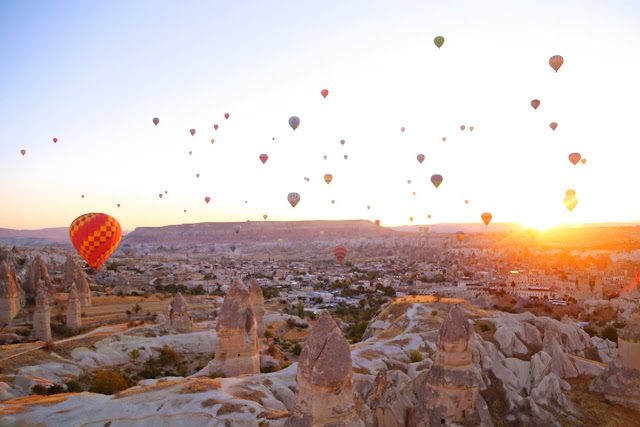 Nature is not the only author of the spectacular setting of Cappadocia. Three thousand years of civilisations have also left their mark. Despite its particular relief, the region has been inhabited since prehistoric times. And men have adapted and even taken advantage of this very particular geology, they have dug in the rock and volcanic matter houses and even churches and built cave villages and underground cities to protect themselves from enemy attacks from the sixth century onwards. There are more than thirty underground cities in Cappadocia. Their depth can sometimes reach up to twelve storeys. The rupestrian churches are an exact replica of the classical churches, that is with the Naves, the cupolas, the only difference is that they are dug in stone and that the frescoes of the biblical scenes were painted on rock walls. Many of them are in excellent condition and still bear witness to Byzantine art.