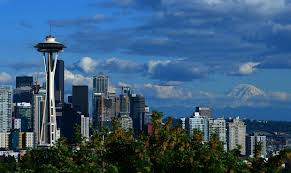 With a thriving food-and-drink scene, eclectic neighborhoods and a stunning coastal setting, Seattle is a dynamic urban enclave nestled in the Pacific Northwest. The city is bounded by Lake Washington in the east and Puget Sound to the west, an ideal location for water recreation and sight-seeing cruises.

The view is spectacular from the observation deck atop the world-famous Space Needle, a 185.5-meter-high legacy of the 1962 World’s Fair and symbol of the city. Locals and visitors alike flock to Pike Place Market on the waterfront, the oldest continuously operating farmer’s market in the U.S. Wander among the stalls teeming with artisanal cheeses, fresh-baked bread and the catch of the day. Visit Chihuly Garden and Glass to see Dale Chihuly’s remarkable studio glass artistry. Be sure to do the Boeing Tour, an in-depth look into the jet’s production facility.

Seattle isn’t just a wine or craft beer town; it’s the home of Starbucks. You can still visit the original storefront adjacent to Pike Place Market. This city is fueled by caffeine; there are 2.5 coffee shops per every 1,000 citizens, making it the greatest concentration of coffee houses of any U.S. city. Among them are the Seattle’s Best and Tully’s brands, boutique roaster Victrola Coffee, and Cloud City Coffee and its $1 a cup honor system. Tour Starbucks Reserve Roastery and Tasting Room for an immersive, future-forward experience (and taste) of the famous brand’s coffee culture.

Paddle, boat, sail and fish on some of the most welcoming waters in the nation, or take a whale watching tour along the Pacific coastline. You’ll also find three national parks within a few hours’ drive of Seattle – North Cascades National Park, with its 300 glaciers; the temperate rainforests of Olympic National Park; and the majesty of Mount Rainier National Park. You may hear Seattle locals say, “The mountain is out,” meaning the snow-capped, 4,392-meter Mount Rainier 161 kilometers to the south is visible. Kerry Park, a half-a-hectare green space on the slope of Queen Anne Hill, offers panoramic Seattle skyline views which are especially stunning at night.