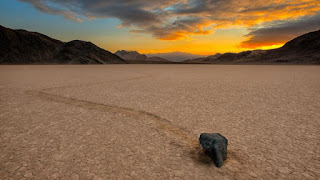 Stretching along the California–Nevada border, Death Valley National Park is famous for its otherworldly landscape, complete with rolling sand dunes and towering mountain peaks. But the most peculiar part of the park’s landscape might be the Racetrack. Located in the California portion of the park, this stretch of dried lakebed looks almost as though it’s made of tiles, the geometric surface disturbed only by — wait for it — traveling rocks. Although no one has actually seen the rocks move, their paths are clearly visible. Scientists believe that the rocks are propelled across the hot desert floor when minimal rainfall freezes and then melts in the hot sun, causing the rocks (some of them weighing up to 270 kilograms) to slide.
The traveling rocks at the Racetrack in Death Valley National Park have perplexed scientists and visitors for decades