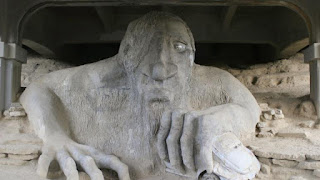 Lurking beneath an overpass in Seattle, Washington’s Fremont district, this troll has been a spooky presence since 1990. He was built by four local artists as part of a competition promoting urban renewal. Standing 5.5 meters in height, the bearded giant clutches a sculpture of a Volkswagen Beetle in one hand while propping himself up with the other, giving him the appearance of climbing out of the ground. The Fremont Troll has become a beloved part of the neighborhood, charming locals and attracting visitors from all over the world.

The Fremont Troll resides under an overpass in Seattle, Washington. Pay him a visit for a memorable photo op