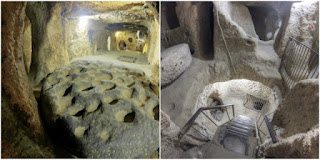 In Cappadocia, Turkey, there are around 35 underground cities. The deep valleys, the splendid rock formations, and the ancient subterranean hideouts were carved by volcanic ash rock millions of years ago.
The volcanic rock proved to be the ideal building in the Central Anatolia region. The deepest underground city is Derinkuyu, while the widest one is the underground city of Kaymakli.
Kaymakli is one of the most visited underground cities in Cappadocia. It is located right beneath the Kaymakli Castle. The ancient name of the city was Enegup. This underground city had eight floors, but only four of them are open for visitors. Kaymakli was once home to more than 3,000 people.
Show More
Facebook Twitter LinkedIn Tumblr Pinterest Reddit VKontakte Share via Email Print