New Orleans is a unique traveling experience if you ever get the chance. Then city has different names. It can range from Nawlins, the Big Easy, the Crescent City, Nola (New Orleans Louisiana) and don’t get me started on the correct pronunciation. The history of New Orleans will give you a quick understanding of the strangeness of the city. It was the capital of French Louisiana for a few decades before it switched colonial rule to Spain. It finally was purchased by the United States in 1803 when Napoleon Bonaparte sold the Louisiana Territory to Thomas Jefferson. This melting pot of religious, ethnic, and various classes of people formed the city it is today!

The best experience about New Orleans is its food. Centuries of different cultures mixing together formed Cajun food and Creole food. What’s the difference Eric?

Cajun food is formed from the country folks of Louisiana. Creole evolved into a more refined cuisine from the city. Cajun’s cooked with what they plentiful around them. (What can you grow in a swamp again?) Creole’s had access to more exotic ingredients.  Even the roux in these areas are produced differently. Creole cooking had access to dairy butter producing a lighter yellow gravy while Cajun roux is made from flour and oil.

Want to hear a Cajun joke? How long does it take for roux to be ready in the pot? When the 6-pack of beer is finished! As you can imagine, Cajun roux is darker.

I am going to talk the most important staple of all Cajun restaurants around the United States, Po’ Boys. The origin of the term is showered in mystery. The mystery originates from a four-month streetcar strike in 1929 in the city. Two brothers, Benny and Clovis Martin, owned their own restaurant around the New Orleans French Market. The brothers felt sorry for the workers and their families so decided to provided sandwiches for the workers since they too were both former streetcar conductors. They referred to these workers as poor boys and the name of the sandwich stuck as Po’Boys. The name change is from the rich New Orleans’ dialect. Historians rebate about the origin still today. 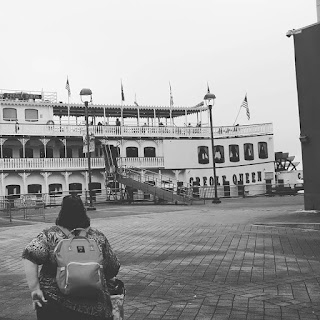 A Po’Boy until the recent 1980s was roast beef, covered in gravy, and placed between two delicious pieces of French Bread. The Po’Boy was then dressed in lettuce, tomato, pickles, and mayonnaise. Simple enough right?

New Orleans prides its French bread. The rumor is that the French bread in Nola is particularly special because of the cities high humidity and lower the sea-level conditions. These special factors causes the crust to be crispy and soft and fluffy in the center. Locals argue that if the bread wasn’t baked in New Orleans, it’s probably not a Po’Boy.

However, recently Po’Boys have been served with fried seafood rather than roast beef. My favorite is fried oysters! Shrimp, red fish, white fish, crawfish, oysters, clams, scallops, any kind of seafood can be used to make a Po’Boy. In conclusion, if you find yourself in the area, try yourself a Po’Boy. You will not be disappointed.